ALL THE WANDERING RECORDING NOTES
BY MR YEARLING
Rob and I spent every Tuesday and Wednesday over 4 weeks in Winter 2013 recording songs at our studio My Sweet Mule, as a duo, just to see what we had and whether or not those sessions would turn out to be our new record.
We recorded live to our cranky MCI 1 inch 8 track tape machine and transferred it digitally to pro tools via a little 8 channel Neve sidecar. We did a bunch of overdubbing and listening and we quickly discovered that we wanted a little more diesel in the tank. We started hearing a horn section on some tunes and female vocals on others and what the songs really wanted was a fat groovy rhythm section, these were not just folk songs to be sung as a duo, they demanded more.

Mick Wordley (recording engineer / producer extraordinaire), who owns and operates Mixmasters Studios in Adelaide, has been involved in all of our records so far. We took him to New York to record "Highway Dancing", he engineered "Sweet Runaway" at My Sweet Mule, he worked on our first and second records, he recorded our live album "Bless This House" and what David Briggs is to Neil Young, Mick Wordley is to The Yearlings. One of his favourite sayings is "Swing Your Bat" and ya just have to love it, he makes you go for the stuff that "feels" right rather than perfecting everything into tedium and soullessness. So for "All The Wandering"  we invited Mick to be involved in helping arrange our songs with the ideas we had in mind. He came around to our house a few Wednesday nights in a row, red wine in hand, and guided us with our arrangements and chucked out stuff in the songs and generally massaged the tunes into shape. He sure plays a mean hammond organ and Fender Rhodes too folks!

Harry Brus would have to be one of the best bass players  in any generation hands down, an amazing student of the groove who has developed his style through his hero James Jamerson who was part of the funk brothers (Marvin Gaye etc). I first heard Harry play in Sydney at the Basement playing with Renee Geyer in the early 80s with my brother Jim, and he tore my face off. I was lucky enough to play in bands with Harry through the 90s and would spend days and days which turned into years jamming at a house he had in Lane Cove (the funk house). It was here I learned about sitting in a groove and staying there. Harry even got me a tour with Renee Geyer and that's another wonderful story for another time.

Teaming him up with our touring drummer BJ Barker (this is BJ's second Yearlings record) was something we couldn't wait for. Beej plays a style different to Harry, he’s not so much a funk drummer more of a song man, and the years he spent playing with Kasey Chambers has formed his style into a thinkin’ man’s drummer, playing for and serving the song. This was what we wanted, both of em’ a “little” out of their comfort zones and to team em’up and play. They found a sweet spot pretty quickly and they have created a wonderful full flowing feel that allowed Rob and I to expand on the ideas we started to gather when we did our winter recordings. BJ would have to be the most subtle, fantastic drummer I/we have ever played with.

So it was pretty exciting thinking about putting horns on the record, we enlisted our good friend Derek Pascoe to do the arrangements and to gather the trumpet and trombone players. Derek plays incredible tenor sax, he's a Jazzer mainly, who is a teacher at the University here in South Australia. They did a great job, subtle and lush. Thanks Deeks.

There's a song on the album titled "Blue Sky Boy", and it's inspired by a trip we did to Memphis in 2012. I saw a woman, a black women down in the "wrong part of town" slumped with her head in her hands and from my narrow point of view from a distance looked like she had nothing and nowhere to go. It deeply moved me and when thinking about recording this song I started hearing Memphis gospel and we thought to get in a female choir in to sing some backups on the song. We got lucky we had Sara Tindley, Tara Carragher, Taasha Coates, Emily Davis and Rob doing their best Memphis gospel, sounds fat!.

Shane Reilly, originally from Adelaide who now lives in Melbourne and has teamed up with one of my favourite singer songwriters and guitar players Mr Matt Walker, happened to be in town so we got him in to play some pedal steel, "Sho Bud" guitar and he nailed it, a wonderful introduction to the album features Shane "winging" it", I said, "just play something at the front of the song and see what happens", it happened!.

Mick Wordley, Rob and myself mixed the album, and it was mastered by Mick and recorded at Mixmasters studio except for "Valley Of Souls", which comes from a session at My Sweet Mule that predates our duo winter sessions, it just had the right vocal, Rob sang it beautifully, we didn't want to touch it. Sometimes when you record it's the times when you think your just doing a demo that the "magic" can happen, you just gotta be ready! 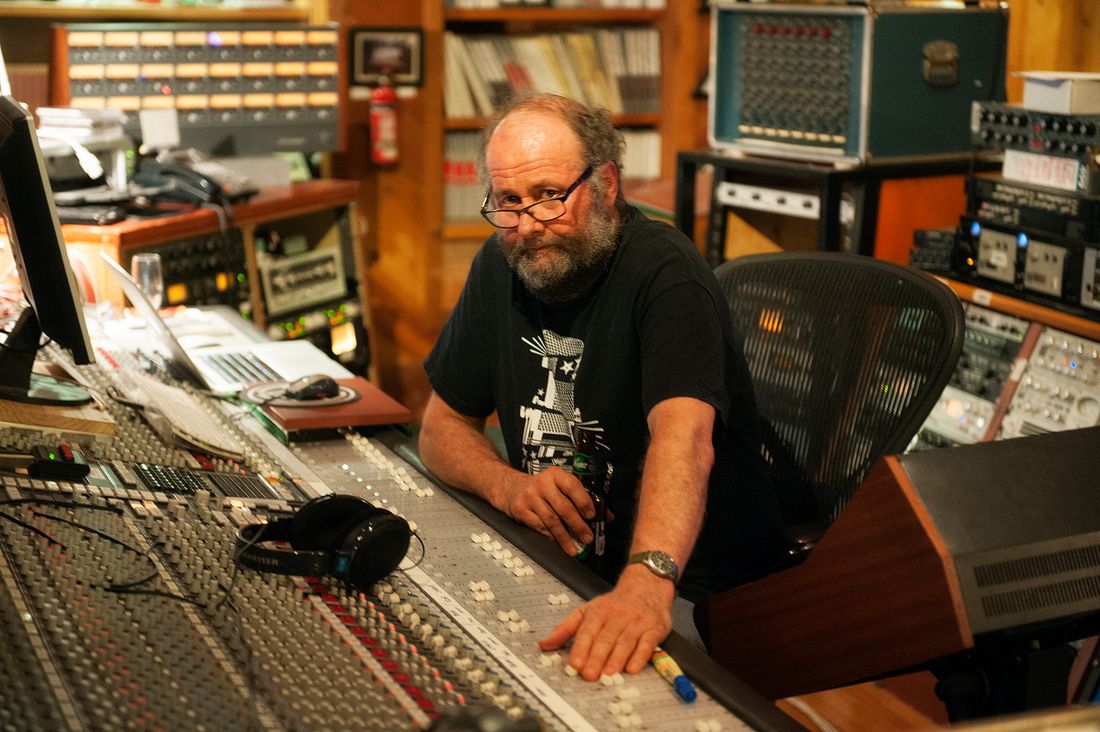 Share photo gallery
Letterpress album sleeve, "All The Wandering"
By Stobietown press.
In April 2014 Chris and Rob from the Yearlings popped by the Stobietown Press studio to print the sleeves for their new album 'All The Wandering'. Taking some inspiration from John Fahey's album Blind Joe Death, the band were keen to keep the design simple and utilitarian - and we reckon they've created a beautifully bold and balanced sleeve.

The front and back covers feature a Ludlow grotesque condensed typeface cast at Archival Products at Henley Beach (South Australia). The spine is a 14pt Gil Sans. The gatefold photo is a 24x12cm photopolymer photograph laid out at 70LPI.
Printed using our old 1890's Cropper Press. After a solid 8hr printing session the guys had plenty of sleeves. The results speak for themselves.